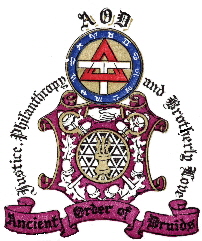 1781:   Foundation of the Ancient Order of Druids (AOD)  in England:  Henry Hurle

1857:  The United Ancient Order of Druids (UAOD) USA approaches British Orders to consider an amalgamation of all Druid societies throughout the world

1908:  Foundation of the International Grand Lodge of Druidism at Munich with representatives from England, USA and Germany

1913:  Under the presidency of  F. Askew (England) and with H. Fricke, Germany, as Vice-President a representative gathering of delegates from the  Druid Orders of the world takes place in London. Australia, Sweden and New Zealand are present. Arrangements concluded for meeting in  conference every five years. Interruption by World War I. Continued  1923.